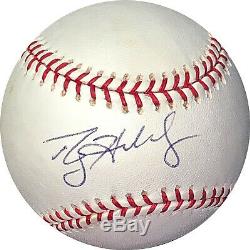 Roy Halladay pitched in Major League Baseball (MLB) for the Toronto Blue Jays and Philadelphia Phillies between 1998 and 2013. Halladay was the Blue Jays' first draft selection in the 1995 MLB draft, the 17th pick overall, and played for the team from 1998 through 2009, after which he was traded to Philadelphia. Halladay was known for his ability to pitch deep into games effectively and, at the time of his retirement, was the active major league leader in complete games with 67, including 20 shutouts.

The seller is "athlonsportscollectibles" and is located in Nashville, Tennessee. This item can be shipped to United States.