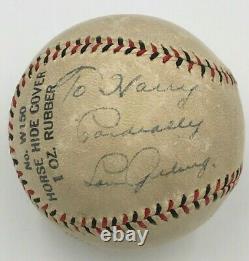 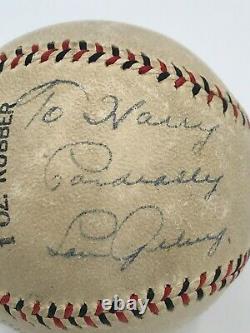 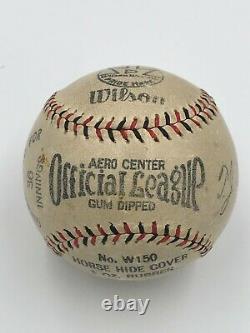 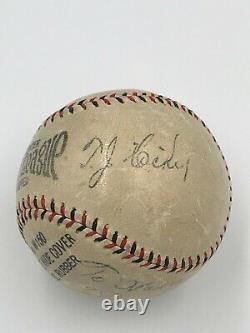 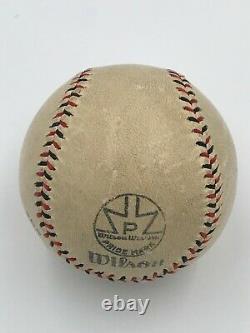 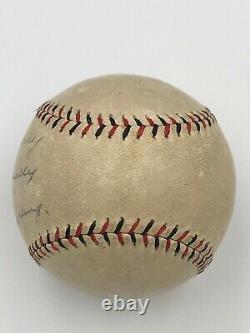 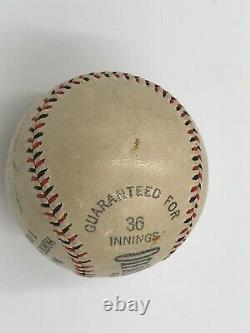 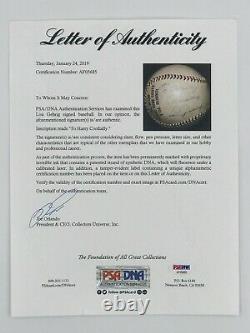 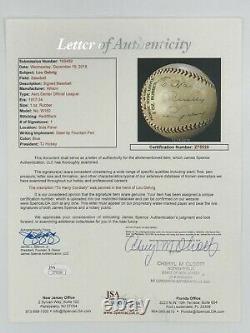 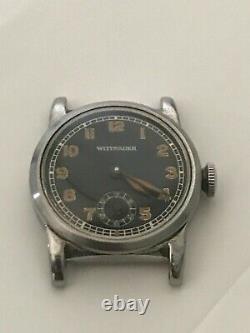 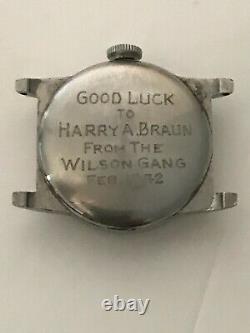 Presented is a stunning LOU GEHRIG personally signed baseball - a true single signed baseball without any removals or any other player signatures. This very scarce Wilson "Official League" American Association baseball is signed and inscribed on the side panel by LOU GEHRIG. The source of this baseball is the family of the original owner, Wilson Sporting Goods executive Harry Braun. Braun met Babe Ruth and Lou Gehrig at the Wilson. Sporting Goods' office in New York City in the early 1930s. The logo and stamping on this remarkably well-preserved ball date to between 1927 and 1933, and the ball itself presents as if it is nearly "fresh out of the box" given its 90 years age. To provide the utmost confidence to the purchaser, the ball also is accompanied by a full Letter of Authenticity from each of PSA/DNA and James Spence Authentication (JSA) accompany the ball. The hand-signed autograph and inscription are definitively penned by Lou Gehrig. The ball reads "To Harry Cordially Lou Gehrig", with both the signature and inscription remaining completely intact and bold, without blemish. The red and black stitched ball has American Association league president T. Hickey stamped on the side panel.

Ball presents in extremely impressive condition. Ball has an even overall condition with only minimal surface wear. See close up pictures to evaluate the condition of this special baseball.

Lou Gehrig single signed baseballs are among the rarest in the world. The ball is accompanied by a 1942 Wittnauer watch gifted to Harry Braun by Wilson Sporting Goods when the young executive left to fight for his country in World War II. The watch is engraved on the case in the back from the "Wilson Gang".

The watch is is included with the signed ball as further attribution of the ball to Mr. Braun and to the source of this truly special baseball. I listed with a "Best Offer" option.

If you have a reasonable amount in mind, please send an offer. Worst thing that could happen is for me to decline the offer. If I counter the offer, it means we are not far apart, so let's work together to close the gap and make a deal. The item "RARE LOU GEHRIG Single Signed Official League Wilson Baseball (PSA & JSA LOA)" is in sale since Thursday, October 8, 2020. This item is in the category "Sports Mem, Cards & Fan Shop\Autographs-Original\Baseball-MLB\Balls". The seller is "bill2001nyc" and is located in Las Vegas, Nevada. This item can be shipped to United States.