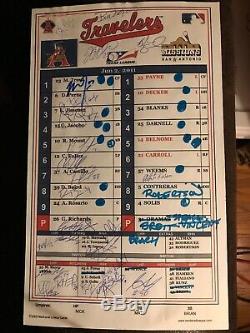 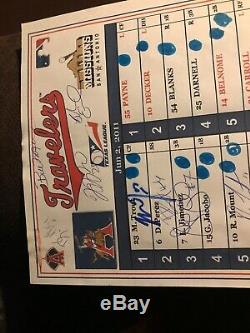 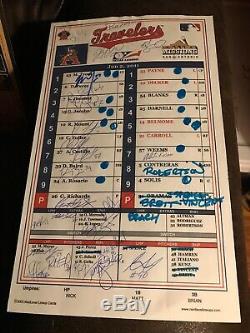 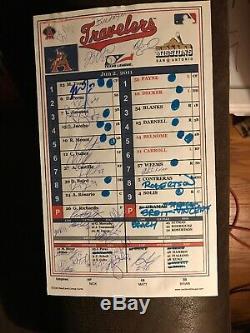 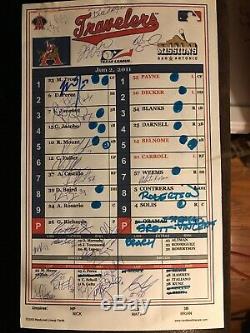 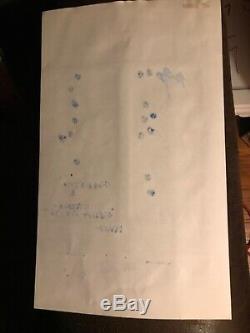 Mike Trout Arkansas Travelers Double A Texas League Baseball Official Game Used Lineup Card from June 2, 2011 6-2-2011. LINEUP CARD HAS WATER STAINS THAT CAME ON IT OR GOT ON IT WHILE BEING SIGNED BY THE TEAM AND MIKE TROUT PERSONALLY THAT HOT SUMMER NIGHT -- I remember I was so excited when I got home that I actually got the coach to give me the lineup card and I got Mike Trout to sign it as I was hearing he was great and I watched Clips of him and he looked like a superstar to be as touted, I was very careful with it I had it on a clipboard as it got signed I would ask the Players on the team if they wanted to hold it or if they wanted me to hold it as they signed itand how they would like me to hold it if so. But after he signed my Game Used Double AA Baseball I didn't want to ask him to change pens and I wanted to try and see if he would sign my card too with same sharpie and I thought it would be kind of unique to have only Trout sign it in Sharpie anyway.

At that moment he was by far the hottest name of any baseball prospect and as we see it was deservedly so. Everyone around him knew he was special and there was this air about him where you could tell everyone knew this kid was great and was going to be a great one. I got a good many top prospect autographs that came thru San Antonio to play AA pro ball and he was very nice but all the coaches were walking with him like they were connected to the hip with him.

He stayed in the clubhouse so long until the Manager was ready to go... I guess he had been signing more than he thought you could tell from his and everyone that he was getting a lot of attention, and he was so cool about it.

I 100% guarantee this to be authentic and signed by Mike Trout that night June 2, 2011 by me personally. This Lineup Card that has all the players autographs and Manager Marks from being Official and Game Used. I personally got this card on the night it was used June 2, 2011 from the Arkansas Travelers Manager after this very game in San Antonio, Texas versus the San Antonio Missions on 6-2-2011 while Mike Trout was in Double A Baseball! The Manager personally promised it to me and told me that he is supposed to send this back to the team but since he had seen me before and knew I was a big fan of Double A Baseball he would make an exception. I have never seen or heard of another out there. Item is signed By MIKE TROUT after this very game I waited for him for at least about an hour and as I waited I got the rest of the team to sign it also. So you can authenticate this fairly easily and I guarantee that it is a genuine real official Double A Arkansas Travelers Mike Trout Lineup Card from 6/2/2011 that he signed in Person!

I also have a Double A Baseball I got signed that day and an Angels early 90s Upper Deck Sticker Holographic Card that my wife got signed the day before or the day after. I was one of only 3-4 people that got his autograph that night as he was still a Prospect at that time. This item is definitely a 1 OF 1 because there is only one lineup card for each game and it has the date on it and the Umps who were present have their first names in print including the Manager Notes and numbers for the game! I felt Mike Trout was headed for big things as he was a Top Prospect, the #1 MILB PROSPECT I believe by this time so I only let him sign it in Blue Sharpie right next to his name! I had to make sure no other player signed in his spot, and I heard that he did not sign at least one of the 3 games though I cannot guarantee that as I wasnt there!

But I was the only person to get a Lineup card as nobody else had the nerve to ask the Manager. The item "Mike Trout Arkansas Travelers AA Texas League Official Game Used Lineup Card 1/1" is in sale since Thursday, July 18, 2019. This item is in the category "Sports Mem, Cards & Fan Shop\Sports Trading Cards\Baseball Cards". The seller is "one-38" and is located in San Antonio, Texas. This item can be shipped to United States.