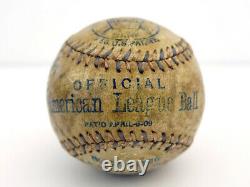 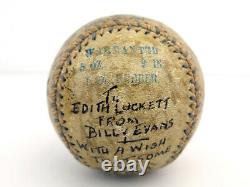 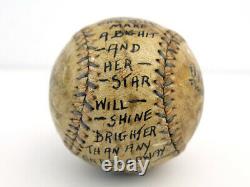 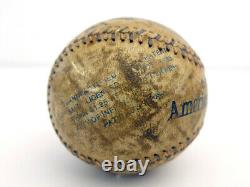 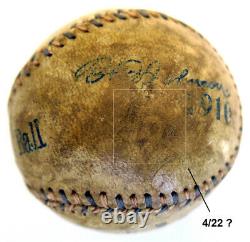 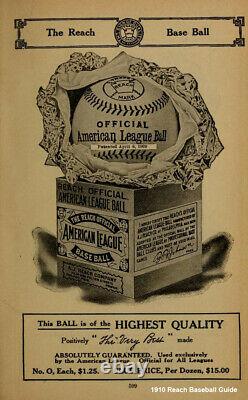 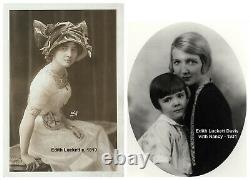 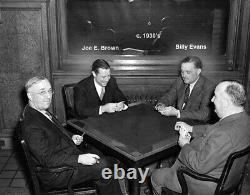 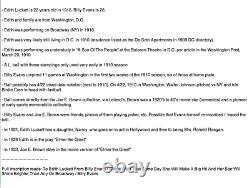 Truly ultra-rare 1910 Reach Official American League Baseball with April-06-09 patent date stamping and 1910 side panel stamping, plus Ban Johnson stamping. The ball has been inscribed and signed (eventually traced over in ink) by young umpire Billy Evans to young Broadway actress Edith Luckett, who would later go on to become better known as the mother of Nancy Reagan. The rarity cannot be overstated. Balls with this stamping configuration were only used in the first weeks of the 1910 season, and I have never seen another example for sale exactly like it.

There was an OAL ball team-signed by the Philadelphia A's, auctioned years ago, that had the April 6 patent date, but it didn't have the 1910 stamp. The ball was lightly lacquered at some point in its history, likely to preserve the traced-over inscription. The red and blue stitching has some evident fading.

As to the inscription and signature, Billy Evans was known as the Kid Umpire, and in 1910 he was 26 years old and starting his fifth year as an American League umpire. Edith Luckett was 22 years old and a rising Broadway theatrical actress. Edith and her family were from Washington DC, and she was still living there in 1910. Evans umpired 11 games in Washington in the first few weeks of 1910, six behind home plate. It is well documented that Edith was a lifelong baseball fan, going to as many games as she could every every season.

The connection between Evans and Luckett in 1910 is unknown, but they would run in some of the same circles later in life. Full inscription reads: To Edith Luckett From Billy Evans / With a Wish That Some Day She Will Make A Big Hit And Her Star Will Shine Brighter Than Any On Broadway / Billy Evans. I have a theory about the inscription and it's eventual tracing-over. The ball came from the collection of Joe E. Brown, who was a well known Hollywood comedic movie star of the 1930's and 40's and a pioneer of early sports game used memorabilia collecting.

He and Billy Evans are known to have been friends (see photo of them playing poker together, below), and I believe it's certainly possible Evans himself may have performed the tracing of the inscription, decades after 1910. Brown likely acquired the ball from Luckett (they ran in the same social and professional circles by the 30's and 40's) and at some point Brown may have had Evans re-write the by-then-fading inscription. Just a theory, but I wouldn't be surprised to be right considering the tracing is well done and quite true to the original penmanship and signature. Last thing: Near the 1910 stamp on the ball, there is a very light inked date that, to my eye, looks to be 4/22. On 4/22 in 1910, Billy Evans was the home plate umpire in Washington as Walter Johnson took the mound versus the New York Highlanders.

The Senators would lose the game and Johnson nearly ended Birdie Cree's career with a fastball to the head. Again, conjecture based on faded ink, but it looks like 4/22 to me. So, this ball kind of has it all. A once in a lifetime rarity with associations to baseball, Broadway, Hollywood, and American political history. Please see all photos with the listing, including some of my notes on the ball, and please feel free to ask any questions you may have.

The item "1910 Reach Official American League Baseball Inscribed by Billy Evans OAL Ball" is in sale since Sunday, February 21, 2021. This item is in the category "Sports Mem, Cards & Fan Shop\Vintage Sports Memorabilia\Baseballs". The seller is "semloh00" and is located in Kansas City, Missouri. This item can be shipped to United States.